On April 1st 2014 MS SQL Server 2014 is internally released for small group of big customers such as bwin and others. The biggest improvement is in-memory OLTP engine to deliver breakthrough performance to their mission critical applications. Company bwin scale its applications to 250K requests a second, a 16x increase from before, and provide an overall faster and smoother customer playing experience.

Microsoft recommends that you provide an amount of memory that’s two times the on-disk size of the memory-optimized tables and indexes.

Why similarity to MongoDB? Because we were using it also and if you have enough RAM memory it keeps all indexes in RAM and is very quick plus it uses the advantages of SSD disks. Where SQL Server shines comparing to Mongo is when you need to group large amount of data and analyze them. Until this version of MS SQL 2014 (we didn’t test it) MongoDB was superior when it comes to large number of insert request into database. For analyzing the large amount of data MS SQL was better. Now, with new SQL Server 2014 it comes closer to MongoDB main advantage (process data in memory and use SSD advantages – if specified). 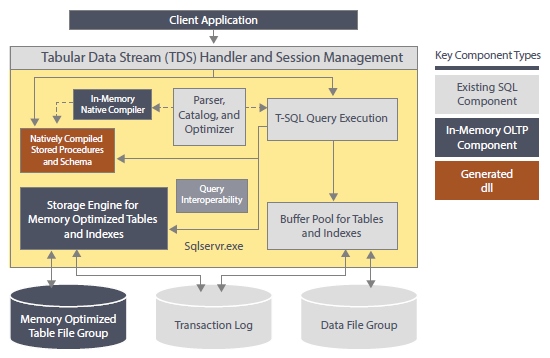 In addition, there are a number of database features that aren’t supported. Here are some of the most important database and table limitations:

More reading about this: